Maestra Dr. Janet Harms, cited in Who's Who Among American Women 2007, an internationally-known organist and conductor, founded Windsong in 1995.  Born and raised on the East Coast, her childhood was blessed with musical talent and early achievement.  At the age of thirteen, she was awarded a scholarship to the renowned Juilliard School of Music by the Jersey City Philharmonic.  She went on to earn advanced degrees from the American Conservatory of Music in Chicago and a Doctorate from New York's Columbia University.

Dr. Harms began her academic career as Professor of Music at Nyack College,

New York, where she conducted the college choir and orchestra in numerous tours

of the East Coast, from Maine to Florida, including performances at Alice Tully Hall

in Lincoln Center. During our country’s Bicentennial year, 1976, she conducted three

moving to the West Coast in 1981, she has held various church music positions,

including the Crystal Cathedral in Garden Grove, where her duties included

conducting the Cathedral Choir and performing frequently on the famous Hazel

Wright organ.  She is currently organist at Rock of the Foothills Church in La Verne.

in the International Organ Series in Dijon, France and Warsaw, Poland in the summer of 2006.

In addition to her devotion to Windsong, founded in 1995, Dr. Harms is an extremely popular music professor at two local universities: Azusa Pacific University, in Azusa, where she is the Chair of the Organ Department, and at California State Polytechnic University, Pomona.  Dr. Harm’s enthusiastic embrace of choral music from all periods has encouraged composers to utilize Windsong to debut new compositions (ten West Coast premiers in the last twenty years).

The Chorale first performed in Carnegie Hall in 1999, under the auspices of Mid-America Productions.  Peter Tiboris, Artistic Director of Mid-America, praised Windsong’s “first-class performance”, and was so impressed as to arrange for three further performances, (2001, 2003, 2005), and many invitations.

In November 0f 2003, Windsong Southland Chorale and Orchestra were supremely honored to present the West Coast premiere of René Clausen’s Memorial, a soaring work of art commissioned by the American Choral Directors Association to commemorate the tragic events of 9/11.  The concert was held in the Sophia Clark Hall at Mount San Antonio College in Walnut, California.

In 2001, Windsong returned to Carnegie Hall to join with 350 singers in presenting Beethoven’s 9th.  Dr. Harms conducted Windsong in a program, accompanied by the Windsong brass.

In 2003, Windsong returned for the 3rd time to Carnegie Hall. Dr. Harms and the Chorale had the distinct privilege of giving Morten Lauridsen’s well-beloved piece, Lux Aeterna, its Carnegie debut.

One of the most poignant concerts Windsong has ever presented was the Carnegie Hall debut of Memorial, in 2005.  Singing this emotionally transformative piece of music in New York, for New Yorkers, moved many to tears, both those sitting in the audience and those singing on stage.

In June of 2007, Windsong was a major participant in the National Festival Chorus World Premiere of the Choral Concert Version of Leonard Bernstein’s Mass conducted by Doreen Rao, at Walt Disney Concert Hall in Los Angeles. Dr. Harms conducted Windsong in Morten Lauridsen’s Lux Aeterna in the same concert.

On September 11, 2011, a dozen Windsong singers were proud participants in the 10th Anniversary Commemorative Concert of 9/11 in Alice Tully Hall in Lincoln Center under the baton of Rene Clausen himself, conducting his glorious Memorial.  Nearly 400 singers came together, representing choirs from all around the country.  The several days of rehearsal with Dr. Clausen were a major part of the whole experience, as he shared his inspiration for each section with the singers, making the singing richer and more meaningful.


Festival of Worship Concerts
These biennial (formerly annual) massed choir concerts began in 2004 as “An Affirmation of Faith and Life” to Mark Thallender, the gifted organist who tragically lost one arm in a motor accident in 2003.  Beginning at Lake Avenue Church in Pasadena, they soon spilled over to the Cathedral of Our Lady of the Angels, in Downtown Los Angeles, being the only venue large enough to hold the typical 1,000 adult and several hundred children singers who participate, plus overflowing audience.  After establishing and coordinating the event for many years, the Mark Thallender Foundation turned it over to Fuller Theological Seminary, of Pasadena, California, and it became known as the “Festival of Worship”.

Windsong was an enthusiastic participant in the initial concert, and has continued to be, in all but one since that time.  The Festival, annually held in mid-February, typically has thirty-five choirs participating, of which Windsong is sometimes the only community choir in a roster of church choirs from all over the Southland.  Dr. Harms has a personal connection to the event, as she and Mark Thallender were colleagues for many years as organists for the Crystal Cathedral in Garden Grove, California.


International Concert Tours
In 2002, Windsong toured the Scandinavian cities of Stockholm, Sweden; Oslo, Norway; and Helsinki, Finland, as well as St. Petersburg, Russia, with an ambitious program of American, as well as Scandinavian selections.

In July, 2004, Windsong presented the European premier of Clausen’s Memorial, with orchestra , as well as popular opera choruses in a tour of the Greek cities of Athens, Olympia, Patras, Nafpaktos, and the Island of Syros, as part of a pre-Olympics cultural celebration.  It was a thrill to perform several of the concerts in ancient Greek amphitheatres with natural acoustics.

The Australian tour of 2006 reprised Clausen’s Memorial in St. Andrews Cathedral and Town Hall, both in in Sydney. Windsong and thirteen other choirs from many places, performed the Requiem Op.9 by Maurice Duruflé with the “Voices in The House” tour in the iconic Sydney Opera House.

In 2018, Windsong toured Germany, Austria and the Czech Republic (the "Mozart" tour), and performed in magnificent cathedrals and other venues in Salzburg, Prague, and other locations. 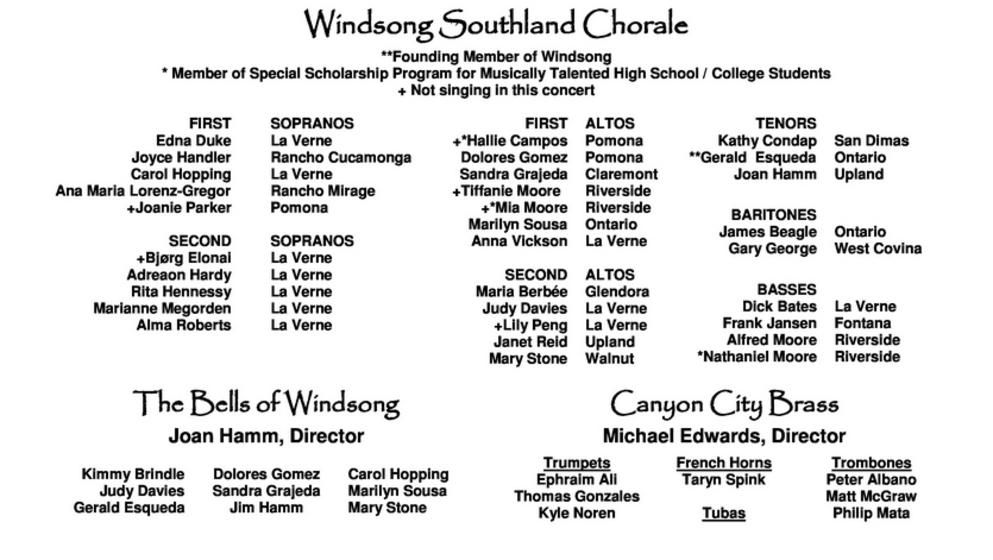 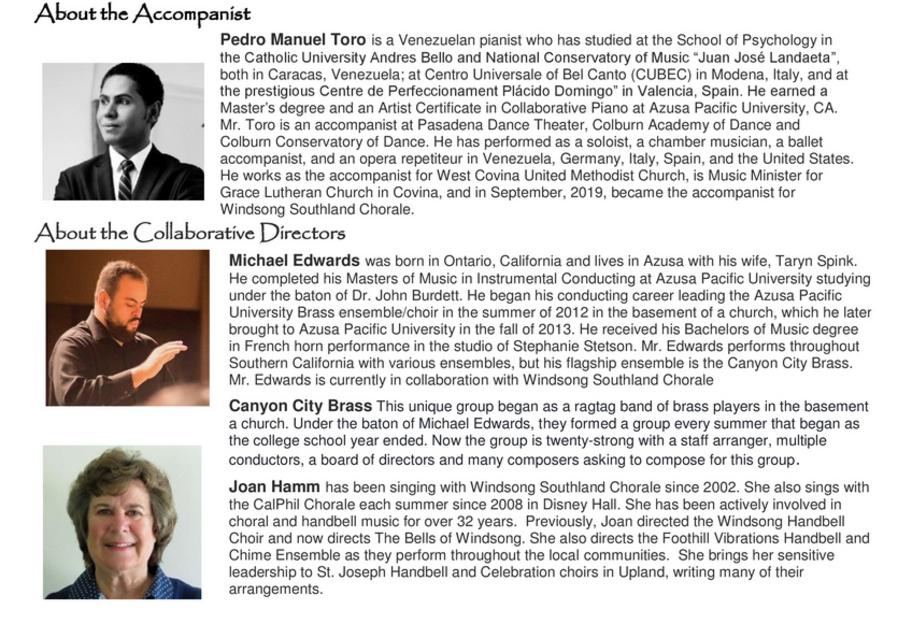 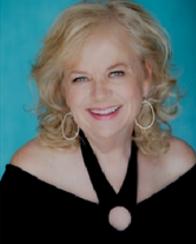